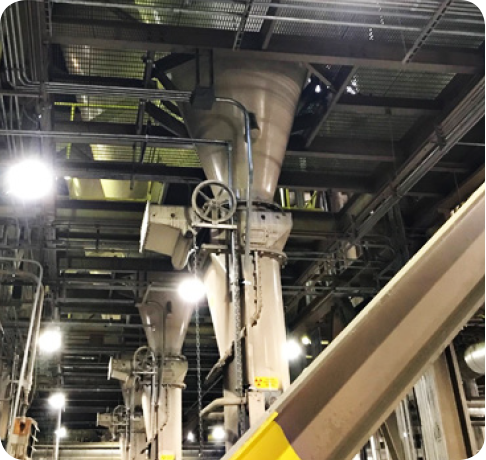 Over the past few years, there have been several coal silo failures in power plants in the US and abroad. These failures have dropped as much as 800 tons of coal on the floor below them. To date no injuries have occurred but significant equipment damage has resulted.

The most common cause of failure is occurring in the welds from shell to cone in silos with a C/S shell and SS cone. The failures have occurred primarily at the 40-year mark of operation. Insurance companies are recommending that all silos be inspected at the expected half-life of the power plant (30/2 or fifteen years). The recommendation has been made to almost all coal fired power plants with coal silos.

*Please note some plants have square coal “bins” which are not the same. 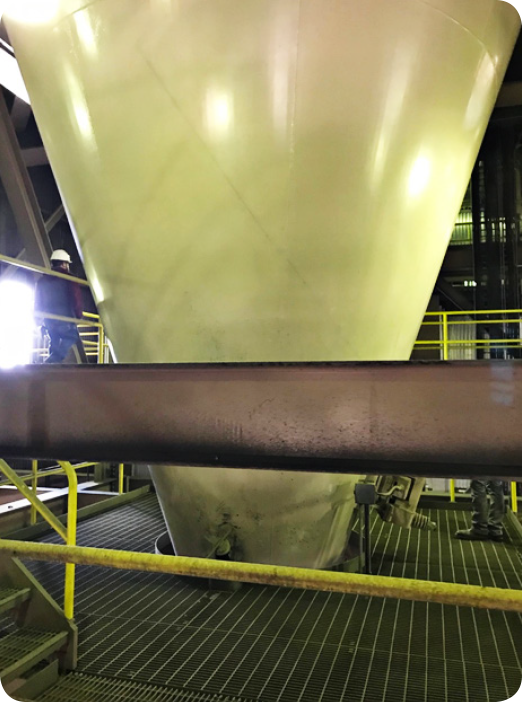 To date, Acuren has inspected silos for several power companies. Our experts have seen everything from no evidence of structural damage to silos with cracks, shell distortion and shell thinning. One client had all C/S cones and silos inspected; no evidence of any cracking was found. At another site, Acuren found cracks in the heat affected zone of the dissimilar metal weld and base material of the cone. Another anomaly that was discovered was a case of severe underfill of the shell to cone weld on the inside of the joint. We verified this using rope access and visual inspection while the silo was out of service. It was determined that the amount of weld deposited was insufficient for the load. The plant is developing a plan for proper repair.

Per Acuren’s experience and collaboration with a mutual insurance company that focuses on the Highly Protected Risk market sector, it has been determined that with higher use of a given silo the more it is prone to cracking. This is the case of the plant with numerous cracks. Plants might run certain silos more often where loading and unloading or cycling leads to greater probability of cracking.

It is imperative to have an experienced and dependable inspection company as a partner since all silos are different. Silo construction is not under the jurisdiction of any regulatory codes and no known measures are in place to assure the quality of these welds.

Acuren custom inspection solutions and specific inspection plans are a direct result of interaction with the client’s plant/site engineering team and the design of the silo because every silo is different.

Site drawings/blueprints and a walkdown with our experts are completed to build your inspection plan.

Acuren’s inspection of the shell to weld dissimilar metal weld is done primarily with PAUT. Typically, a reference standard is made from the documented joint design with three EDM notches placed at potential crack propagation sites.

This reference standard shows that a plate is welded on the outside of the C/S shell preventing UT from being done from that point. For this particular project, our techs scanned the weld joint from the underside at the crotch of the cone and shell junction with a Cobra probe on the SS cone (angled piece). Acuren experts have also found large amounts of slag in the welds that has not caused cracking. They have seen significant amounts lack of fusion (LOF) at the backside of the joint as well. The significant cracks have been found to open on the inside weld at the HAZ.

Since each silo design is slightly different, many times welds are difficult to access thus Acuren’s rope access solution is a valuable method when inspecting from the inside. Rope access inspection can only be done when the units are out of service. PAUT is available from the outside while the plant is online.

When clients want to know more about the shell, Acuren uses our UT crawlers proving invaluable in some cases. At times, some silos have so much structure around them that UTT must be done from ropes from the inside of silo. 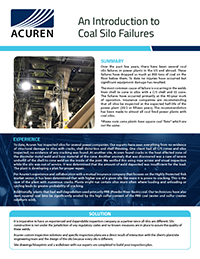 During a planned outage ultrasonic testing and visual inspection revealed that a significant portion of the pump box floor either needed to be repaired, or cut out and replaced.

Related Industries
Aerospace
Acuren has a specialized team with aerospace industry experience that use both traditional and advanced nondestructive testing methods to identify defects in critical structural, airframe, and engine and accessory components.
Mining
Acuren’s engineering, inspection and industrial services teams consist of engineers, technologists and tradespeople with a diverse educational background, working in the mining industry for over 40 years.
Rail
We are familiar with the unique codes and regulations of the rail industry, including DOT in the US and Transport Canada, and we're constantly innovating to create enhanced testing procedures that ensure optimum quality and safety.
1-800-218-7450