Over the course of 2 years, Acuren’s high temperature phased array specialist team saved a Saudi Arabia client an estimated excess of $5,000,000 in costs that would have been incurred from shutdowns including lost revenue and commitment to production needs.

A global leader in diversified chemicals reached out to Acuren in search for improved phased array examinations that could identify stress corrosion cracking on EO reactors. On numerous occasions their current on-site provider missed cracking and grossly under sized and at times oversized cracking. Additionally, their current provider was only able to provide phased array inspections while the reactors were shutdown.

To solve this problem, Acuren hosted a client demonstration in their La Porte, TX branch within three weeks of being approached to showcase first hand their HTPAUT techniques with an abbreviated qualification or proof-of-principle. The demo was later followed by a Saudi Arabia on-site demonstration on a live reactor trailed by examinations that were later verified by the client through cross-sectioning of the cracked areas.

The client concluded that Acuren’s data was not only much better than their current vendor was doing on the out-of-service (ambient temp) reactor but the examinations were also five times faster. Shortly after Acuren performed the first inspection on a series of two reactors allowing the client to eliminate future shutdowns for inspections. Acuren used HTPAUT equipment which included special PAUT probes and wedges, a high powered pulser module PAUT unit, special high temperature scanner and special couplant and cooling system to successfully complete the project. 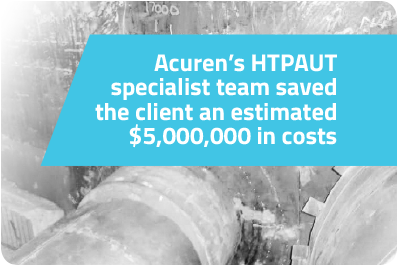 This 2013 Saudi project was the first project in the world where 100% reactor inspection had been done using high temperature phased array techniques. Prior to this only spot inspections had been performed.

Acuren is the only provider able to perform High Temperature Phased Array at the highest quality making it industry leader. Contact one of our experts today to learn more about Acuren services and how they can help provide personalized solutions to protect your assets. 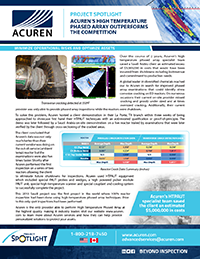