This client is a multidisciplinary professional services firm that provides airport fuel consortium administration, fuel infrastructure project and construction management for aviation fuel and ground fuel facilities at major airports in North America. Acuren has been a primary API service provider for them across Canada, including supporting a major 2016 inspection. Acuren engineers, working with their construction managers, were able to eliminate considerable time and cost from a recent tank refurbishment project.

Quite often routine inspection activities of plant static equipment (tanks, piping and vessels) will uncover damage and deterioration that falls outside the scope of evaluation of the reference standard (API 510/570/653). This type of damage is often found as settlement, corrosion, deformations, laminations, cracks or other similar service related flaws.

For any operator, optimizing run time and properly allocating maintenance capital is a critically managed task. Historically, a damaged tank, piping or vessel that could not be evaluated successfully using basic standard practices was slated for costly repair, or decommissioning. When this customer was faced with an aviation fuel tank that had bottom settlement well beyond the limits of API 653, they turned to Acuren to fully understand their options. Typical repair methods would involve re-levelling the tank, usually by jacking and localized grouting, which almost always induces additional stress on the tank pressure boundary and structure. They were estimating at least two months of schedule and approximately $500,000 to complete the repairs.

Acuren proposed the use of finite element analysis to model actual stress and determine if the settlement was indeed in excess of the allowable stresses.

The Acuren solution would take 1 week and cost less than $20,000. The client was estimating at least two months of schedule and approximately $500,000 to complete the repairs.

API 653 permits the use of advanced engineering methodologies to evaluate tanks that exceed the limits of the standard for edge settlement and out of plane deflection. Finite element analysis (FEA) is often the preferred method as it allows the tank to be modelled for its entirety with live analysis of respective components to the “as-is” condition. An FEA model was generated for the tank using over 26,000 quadrilateral and triangular shell type elements which encompass the entire tank including floor, shell, roof nozzles and manways. Smaller element sizes were used to model the areas around shell nozzles and manways to be able to capture the stress concentrations at the intersections of nozzles and shell. Von Mises stress results are often used as the output from finite element analysis (FEA) models, because they represent the complete state of stress at any point of the model numerically. It is a calculated value based on distortion energy theory, stating that failure will occur by yielding when the von Mises stress exceeds the yield strength of the material. The von Mises stress is a widely accepted failure criteria for ductile materials, and fits experimental data well. All components of the modelled tank were well within the allowable stress values and the tank in question was returned to service without additional re-work. 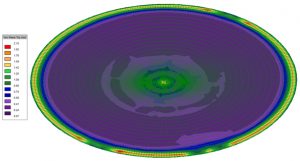 The use of Finite Element Analysis combined with Acuren’s immense experience working with plant equipment allowed this customer to:

If you would like more details about this project, or how our specialists can help you with your tank projects, please email our team at tanks@acuren.com. We would love to hear from you. 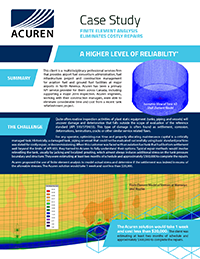